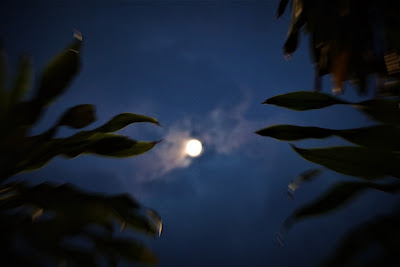 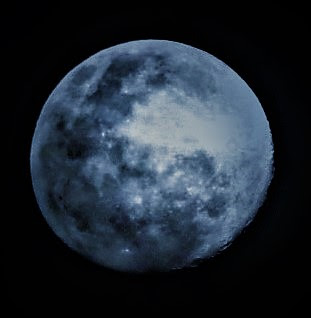 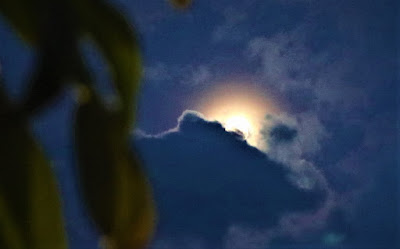 Enoy it folks as much as I had enjoyed snapping it. Have a nice day. 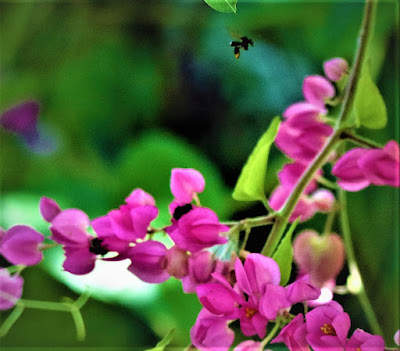 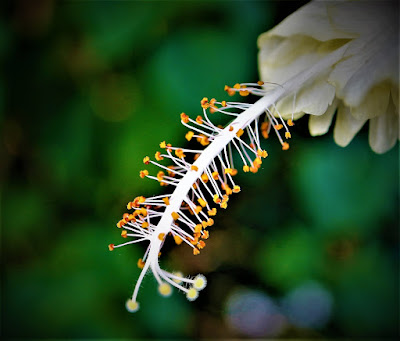 I love to do Macro Photography. It the way to get the best of flowers and small insects. By using the Micro lens we get to get a closer looks of flowers or small insets which we would not otherwise be able to see. Above are two shots that I took recently  of flowers near my house. The top one I  use the latest Canon Micro lens the Macro 28 mm and the one below it I use the 200 mm lens on the EOS M 5. Enjoy it folks much as I had enjoyed taking it..

The Moon in the morning... 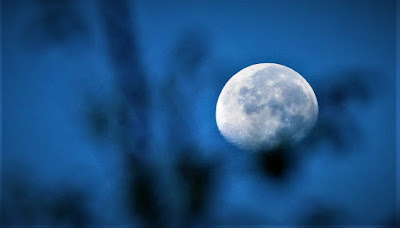 The moon looks different in the dark night than in the early morning where there some light. It is really nice to see the moon in the early morning. In the early hours I could do a shoot with the other objects, thus give it an interesting look comparing with the other object like the trees or the leaves. On yesterday's morning I saw the moon on the northwest of the sky in front of my house. When it in that position I could  take a picture with the objects in the fore and at the same time focusing on the moon. The result is a more creative picture.  Above are two images that I took yesterday. 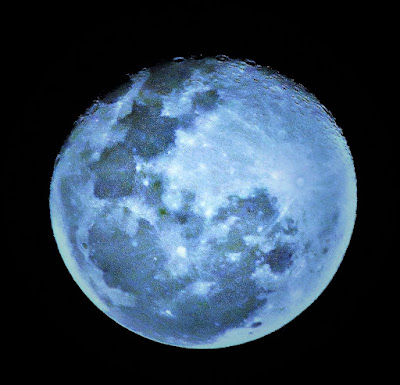 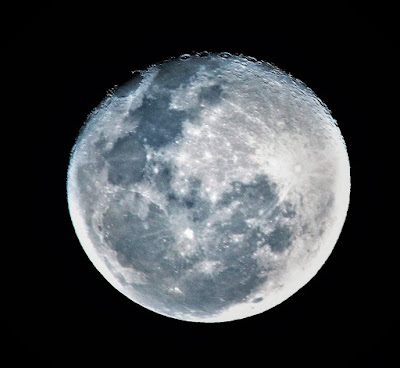 As always I am fascinated with the sky and the galaxy where the millions of stars shown glittering every evening thus I took pictures of the moon and the sun from time to time. To get a better images of the heaven I decided to get a better lens for such photography. The lens that I had been using is for a 200 mm shot and yesterday I went out to get myself a new gift, a 300 mm lens. At the friend's outlet  at KLCC I was told by the sales person there that its better to get a 500 mm instead of the 300 and that the price is not that much difference. After looking at the 500 mm lens and testing it I decided to get it. So last evening on 12.1.20 at past 10.00 pm I decided to test the new lens but it was cloudy and the moon was behind the cloud. I went back into the house and a moment later I was alerted by a friend that the moon is  bright out there. I took the Canon EOS M5 and with the new lens fixed to it and took a few shots. It was indeed amazing to see the moon with its craters so clear. Above are two shots of the moon taken one minute after another. Enjoy it folks as much as I had enjoyed taking it.

The Mystic of the Moon... 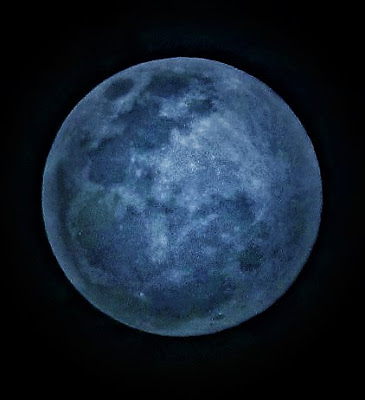 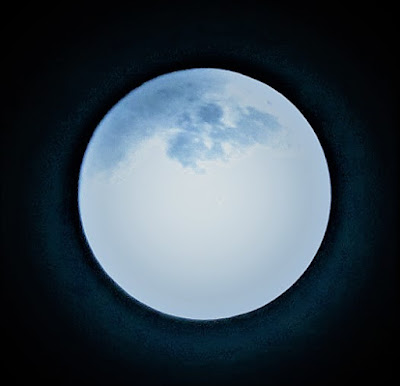 As usual I love to shoot the night sky especially the heavenly objects like the moon or other planet up there. I managed to get a good shot of the full moon which happened on January 10 and 11, 2020. I took a shot of the almost full moon on the evening at 8.17 pm. Although it was sort of cloudy I  managed to get a good shot and share it on Facebook. Then a friend post a comment of FB saying that I should wait till 3.00 am the next morning where there is a penumbral eclipse of the moon.  I went to sleep hoping that I would managed to wake up and shoot the moon in the early hours on January 11, 2020. Happy with the shot this evening I went to sleep and woke up at just past two in the morning. As usual when I wake up in the early morning I would do the Tahajud prayer. I did that and then took my camera with the 200 mm lens and went out to have a look at the sky. Sure enough up there on the west the full moon was shining bright on a clear sky. I was delighted and took as many shots as I could and then set in front to my laptop to edit the  pictures. Above are the two images that I took, one on the evening of the 10th and the other in the early morning of the 11, January, 2020. Enjoy it folks as much as I had enjoyed snapping it.

Have a nice day.
Posted by Pak Idrus at 9:37 PM No comments: 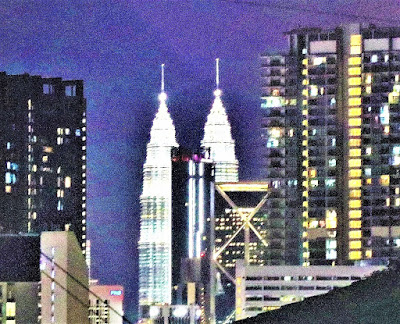 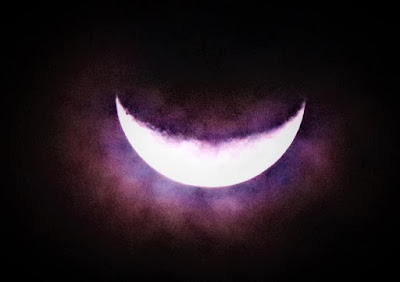 Good Morning folks; woke up to a gorgeous Wednesday with the sun shining bright. It the first of January of the new year 2020. Let hopes the new year brings better things and folks would continue to prosper and enjoy life. Above are images of the last day of the year 2019. I snaps those image so as to remember that moment in times. 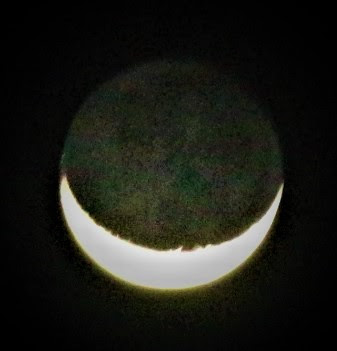 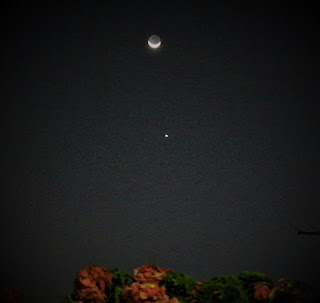 Last evening [ December 29, 2019] I went out to look at  the sky and there in front of me up above is the crescent Moon and below is another bright light like a star. It always there but today it a bit brighter and in line with the crescent moon above it. I then went up the house and took my camera with the telephoto lens. I came  back and snap the picture of the crescent moon and the scene of the moon and that bright star. I then posted on Facebook and was told in comments and on checking other sources on Google that the dot in the sky below the moon is Venus. I am indeed happy to know now that bright Star that I at time saw in the evening sky is the planet Venus or Mars. This time it is indeed Venus. Above are images of the sky that I took at 8.17 pm last night.

Have a nice day.
Posted by Pak Idrus at 9:26 PM No comments:

"Nothing is impossible to a willing mind" 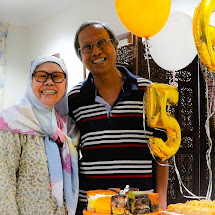